heading for the coast.
The alarm came much too early, as alarms always do. Peter and I were a bit distracted in getting packed because of a litter of feral kittens that were hopping around outside our window…we sat and watched them for a little while. They were at that adorable age where they trip on themselves and kinda bounce sideways when they try to run. 🙂

We eventually pried ourselves away from the kitties and got ready to go. The Parkfield Cafe doesn’t open for breakfast until 9:30am, so we had to get an hour or so down the road before making a food stop. The Inn had a “continental breakfast” of sorts, in the sense that there was a kitchen area in the common room with a refrigerator; there was some bread and jam, but we all needed “real food” to face down another full day of riding. We made plans to ride southwest to Paso Robles and have breakfast there.

I had taken this same photo with the Z in April, so I figured I needed one with the XT:

What’s a trip to Parkfield without jumping on the fault line?? Peter and I decided to see if we couldn’t trigger Parkfield’s next Big One; (un?)fortunately, we weren’t successful. Next time, maybe we’ll have to get down into the dry creek bed itself. Clearly just jumping on a bridge spanning the fault line wasn’t going to cut it.

We found another, more unsual, ranch too: llamas!

We arrived in Paso Robles shortly thereafter, and decided to have breakfast at Margie’s Diner. I know I’ve eaten there before, but I couldn’t place where. I think it might have been with Jenny and Akili on our way back from Arizona, but it’s been driving me nuts. We had huge portions of omelettes, coffee, french toast, etc. A decent enough breakfast.

Chris peeled off from us after breakfast; he wanted to take Hwy 46 straight west to the coast and then home. We waved our goodbyes and all got back on the road.

The remaining four of us headed west towards the coast, too, but we did a little diversion along Adelaida and Vineyard Roads before getting onto Highway 46. I really like this area just west of Paso Robles; it was my third time on these roads (in hindsight, I’ve been on them one time each per motorcycle I’ve owned…) and they always put a smile on my face. Green, lush, windy, low-trafficked…just plain nice motorcycle roads.

Hiding out under a tree canopy along Vineyard Drive:

A hop, skip, and jump after getting onto Highway 46, we got off it again for Santa Rosa Creek Road. Now here’s an XT-friendly “paved” road. 😉 I’d done this one once before, too, on the SVS many many years ago (well, OK, only four years ago, but still). I remembered it as being painfully torn up, and I was pretty miserable as I spent the entire time staring at the road and then reprimanding myself for staring at the road. Santa Rosa Creek Road definitely fits with its namesake, St Rose of Lima — severe penance, physical disfiguring, beds of stone and glass… The road was much more fun this time around, with both 60,000 more miles of riding experience and a dual-sport. 😉

A nice little elevation change; that’s the same road there on the left:

The guys waited for me in a high school parking lot just outside of Cambria (ok, so I stop for a lot of photos…), Peter making his usual “I’m on a road trip” phone call to his parents. I think I have pictures from three separate trips now where he wound up calling home from the middle of nowhere…

Once we got onto Highway 1 to head north on the coast, the weather took a turn for the cold. I do learn a lot through motorcycle touring, and what I learned this weekend was that when it gets really super hot in the central valley (i.e. 108F in Coalinga on Saturday), it sucks in the fog along the coast (i.e. 60F and foggy on Highway 1 on Sunday).

On a streetbike ride, I’d be wearing my FirstGear Kilimanjaro jacket, so no problem: zip up the vents and I’m ready to keep riding. This time, though, I was in all mesh gear because I knew we’d be off-roading in the central valley. By the time we made it halfway up the coast, I was wearing my tank top, a T-shirt, a long-sleeved T-shirt, and my mesh jacket with waterproof liner, and I was still cold. I’d long ago swapped my mesh gloves for the leather streetriding ones, so that helped a bit, but Peter and I still jumped up and down and tried to warm up at each photo stop.

Look, ma! It’s us at the ocean! I think I have these same photos from like 4000 different trips.

Life warmed up slightly as we rode into Big Sur. Peter and I got stuck behind the world’s slowest humans, as is wont to happen along this section of Highway 1, but this time we just hung behind the cars. It’s not like our 19 whopping horsepower would really zip past Aunt Martha in her Ford Excessive. Other than that, though, the XT did really well on the 75 miles of twisty, paved, Highway 1. I felt stable in the turns and comfortable at ambiant traffic pace, even with the stock knobby tires.

We stopped in Big Sur for food, but the first place we stopped had JUST closed the cafe. They literally put the “closed” sign up as we walked up to the door. Doh! So we continued up the road a titch to our old favorite, the Big Sur River Inn. We got a nice table outside, a jazz band was playing, and life was good.

After lunch came the highlight of the whole day: Old Coast Road.

As you can see in the above photo, Old Coast Road took us through some forested areas as well as ridgetops. The redwood sections were my favorites; I like bouncing and bumping over tree roots and enjoying the variety of scenery that vegetation provides. It did cause some close calls with oncoming traffic, though; it’s hard to see around turns in the redwood forests, and sometimes locals in pickups would come around a corner assuming no one would be oncoming. Luckily, no one was moving quickly, so it was easy for both parties to scurry to the sides to let the other pass.

After the redwoods came more ridgetops. In hindsight, it’s hard to believe this section was only 10 miles long, given its varied scenery, terrain, and elevation. I could just ride this road back and forth all day and never get bored. We all stopped for photos a million and a half times, though I wasn’t taking many as my camera’s memory card was full. Doh! One advantage to streetbike riding — I can put my laptop in the tailbag and download each day’s photos at night. Fortunately, after our return, Peter bought me a great big huge memory card, so hopefully this won’t happen again. 😉

Jim and Gary coming up a hill:

Jim’s in the middle of this photo, waiting to photograph Gary coming around the bend:

It was a really enjoyable section for me on the XT. I went wide on one turn when the elevation changed more rapidly than I was expecting, but other than that, my riding was pretty decent. I talked to myself a lot, reminding myself to weight the pegs or to stay off the clutch on steep descents (for some reason, I always want to squeeze in the clutch and coast, which doesn’t work so well). All in all, I think I did pretty well and the XT did awesome. I think it’s patiently waiting for my skill set to catch up with its competence. 😉

All too soon, we rounded a corner to see Bixby Bridge. Prior to its construction in 1932, Old Coast Road was the only way from Carmel to Big Sur, but now everyone naturally takes Highway 1.

A photo of the bridge under construction: 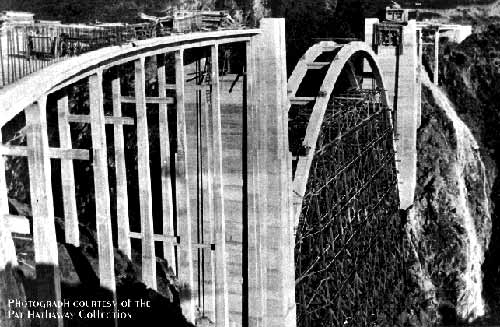 The Bixby Bridge is over 260 feet tall and over 700 feet long, and is the most photographed manmade object along the coastline. It’s considered a symbol of man working with the environment; the other option for spanning Bixby Canyon involved cutting an 890-foot tunnel through the Santa Lucia Mountains that would route Highway 1 through Los Padres National Forest.

It was neat to see the bridge from a new angle (other than riding on top of it, as I’ve done a million times on Hwy 1). Even through the heavy fog, it’s pretty spectacular.

The rest of our ride home was uneventful. Due to miscommunication, we missed Gary and Jim at the gas station/meet up spot (not surprisingly, Peter and I on our XTs were going more slowly than the other two), but hopefully we didn’t cause them too much worry.

The ride home from Monterey was pretty hard for me, as we were doing freeway speeds in the cold and fog; the former is bad enough on the XT, but add the latter when I was only wearing mesh gear, and I was miserable. I was leading in this section, and I finally stopped at the Thistle Hut in Watsonville to jump around and thaw out. I literally couldn’t feel my fingers. I bought and ate a pint of raspberries, put my cargo pants on over my mesh riding pants, and felt slightly better.

And that was pretty much our trip. It wound up being almost exactly 500 miles; not bad for two days on a little dualsport! I had no mechanical problems, no gas issues (or, more accurate, lack-of-gas issues), no problems whatsoever with the bike. It performed flawlessly on the freeway, paved backroads, and dirt/gravel roads.

The whole route in the context of the state of California: