A maintenance day for everyone

I’ve been back on the bike for a few weeks now and it was nagging me more and more that the Ninjette hadn’t had a service, not even an oil change, in 14 months.   Now, obviously I haven’t been riding for a good chunk of that, but still.  So I made up my mind to wrench on the bike today.

Then I got to thinking about it.  See, the last time I actually spun wrenches myself on a bike was years ago.  Years.  My wonderfully organized tool chest and bookshelf of supplies?  Hidden behind strollers and an extra carseat and a big metal file cabinet that Peter decided he needed and then stuck in the garage in front of my stuff.   My beautiful workbench that Peter built?  Buried under 2 years of garage clutter.  Ugh.  I so did not want to deal with any of that.

So I decided to take the Ninjette in to a mechanic.  Easier said than done…I haven’t taken the bike to an actual shop in a really long time.  Maybe 5 years?  Probably longer.  Anyway, long enough that every single shop I used to use has gone out of business, which I’m sure is a coincidence.  Even the closest Kawasaki dealer went under.  I was prepared to drive 25 miles to the next closest dealer for a service when Peter mentioned hearing about a local place.   Some quality time with the Google machine confirmed that — indeed! — there is an independent motorcycle service place in my own town.  And it gets great reviews online.  I called them up yesterday and they said they could work on my bike today.  SOLD!

It’s called Peninsula Motorsports Service & Repair, by the way, and you should go there.

I pulled up and was pleased to see a parking lot full of all kinds of bikes.  Cruisers, sports bikes, race bikes, dirt bikes, sport-tourers, adventure bikes, even a scooter. 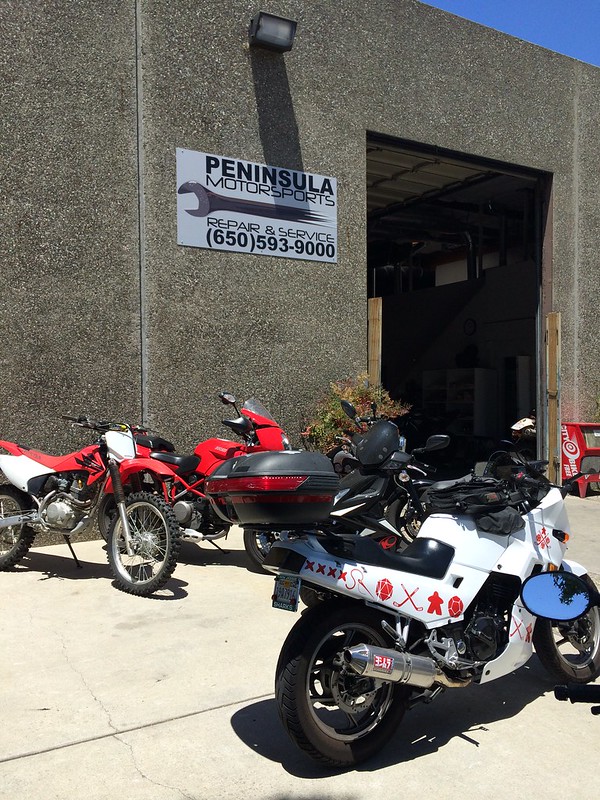 I went in and chatted with the front desk guy for a few minutes.  I gave him a brief rundown of what I would do if I had the time and inclination — oil/filter change, coolant change, checking of various systems and cables and hoses, adjust and clean the chain.   He was incredibly nice and never did the condescending-to-female-rider bullshit or tried to up sell me on anything.  He showed me where I could leave my gear and I said I’d be back in a couple of hours.

My bike in good hands, I was off to the second maintenance of the day: me!  Yeah, OK, the motorcycle repair shop got great reviews online, but let’s be honest, a big reason I chose to take the bike there was because it was just under a mile away from a day spa.  Have I mentioned that I’m a massage junkie?  Because I am.  And it always amuses me to go to a new day spa wearing motorcycle gear and see how I’m treated.  Seriously, I can usually tell whether the services are any good based on whether I’m ignored by the receptionist in favor of women with perfect hair and makeup and manicures.

Happily, I can report that Avant Day Spa is motorcycle friendly.  I wasn’t wearing all of my gear, so my test wasn’t 100% accurate — guess I’ll just have to go back — but I did walk in looking like a “before” from What Not to Wear.  Motorcycle boots, jeans, graphic T-shirt, hair in ponytail. 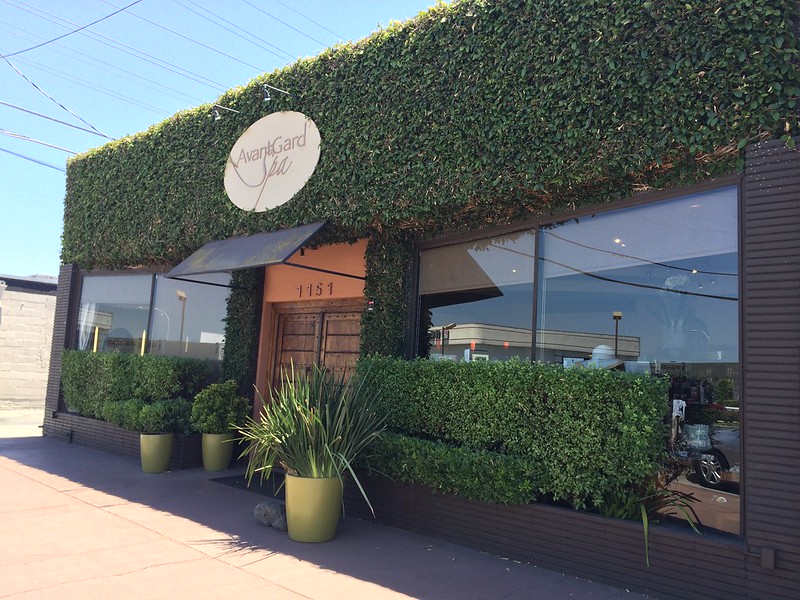 This was my first time at this spa and I was quite impressed.  I went with the “aromatherapy” massage and got a custom-blended oil, including a take-home bottle for the extra. 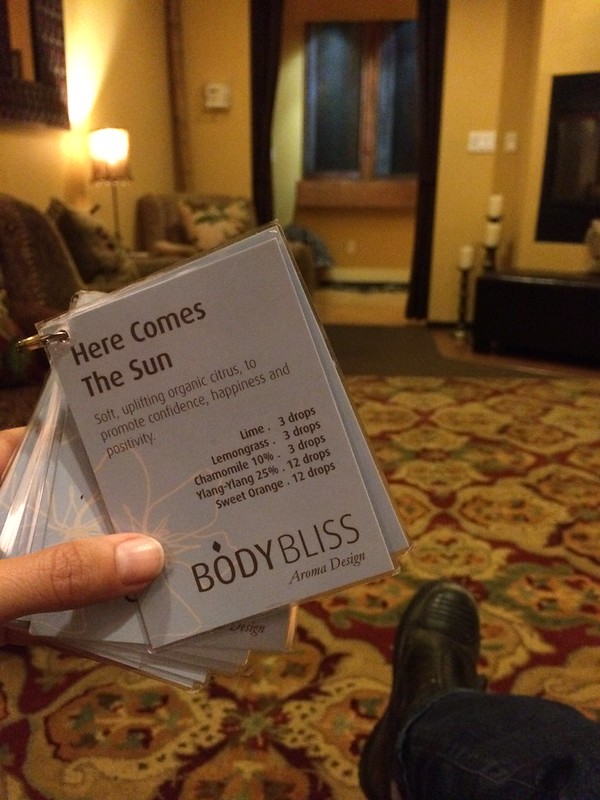 See how I really classy up the place with my motorcycle boots?  Just what you want in your upscale business! 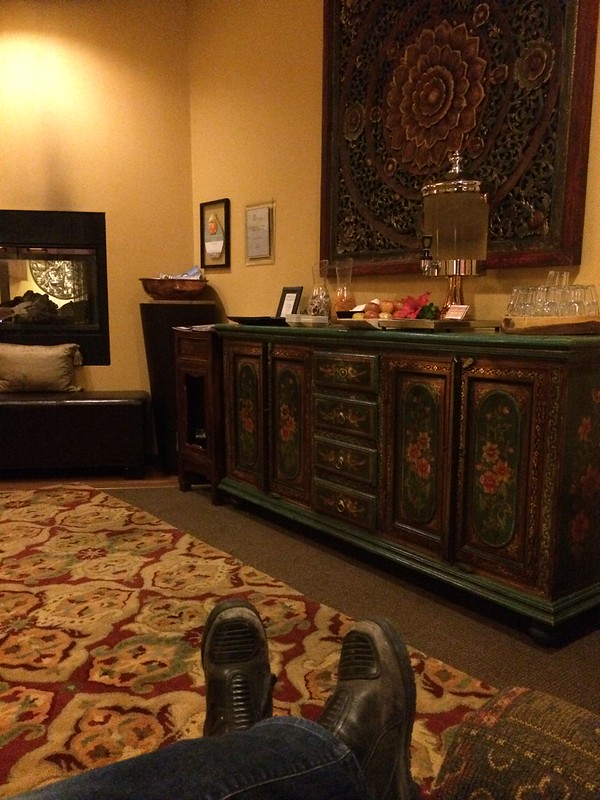 I realize that, as a parent, my standards for luxury are now set incredibly low (“is anyone currently actively pooping on me?”) but the infused water and free snacks were really good.  I could have sat there all day.

Anyway, the massage was great and then I had lunch at a sushi place literally right next door.  Win!

After lunch, I walked back to Peninsula Motorsports, where my bike was already done (they had called while I was eating).    Everything was done and ready in 2.5 hours and for under $200.  I think it would have taken me 2.5 hours just to find my tools.  The mechanic reported that everything looked good, except for the front axle nut, which was finger tight. This is the downside to riding a Ninjette — at least once a year, some incredibly important piece of the bike is one pothole away from vibrating off.  Last year, the engine mount bolts were finger tight; this year it was the axle.  Next year it’ll be the steering stem or something.  Check your bolts, fellow Ninjette riders!

The only problem that I had was my own fault…since it had been approximately forever since I’d had a mechanic work on my bike, I forgot to mention that I intentionally have my clutch lever set incorrectly.  The mechanic at Peninsula very nicely put the friction zone back where god and Kawasaki intended, which means that I nearly wheelied going out of the parking lot as I had revved to about 13891923823791723 RPMs by the time it finally engaged.

This is where the mechanic (and Kawasaki) put my friction zone: 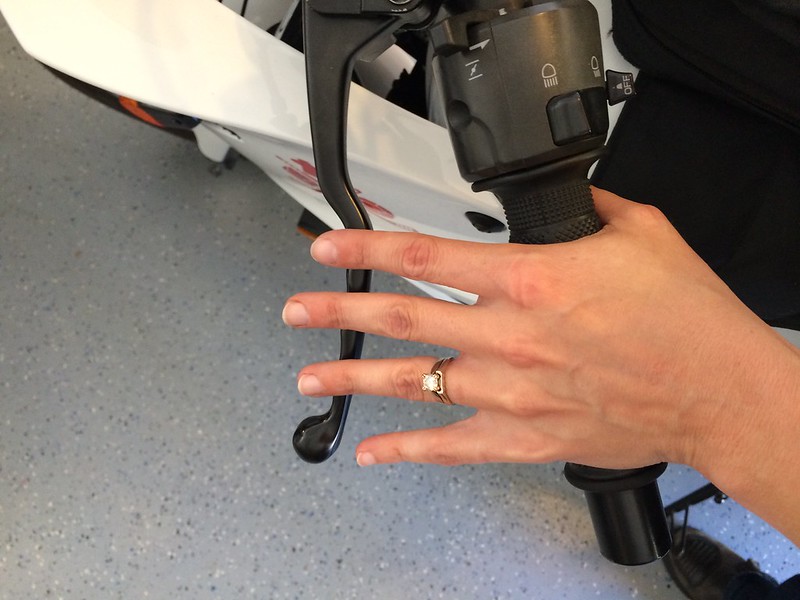 This is where I actually want the friction zone, due to having tiny hobbit-sized hands: 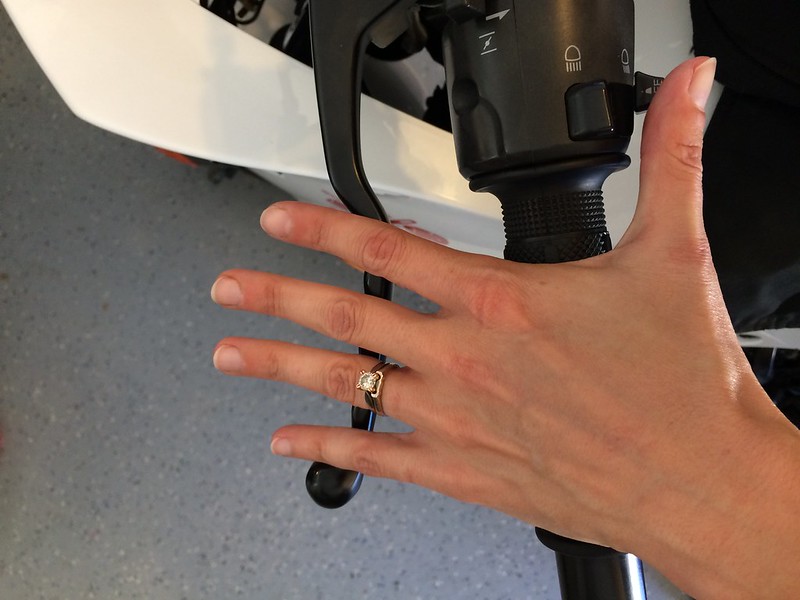 That was easy to fix, though, and next time I’ll just remember to tell them not to mess with my clutch lever.

All in all, both the Ninjette and I had a very successful maintenance day and I highly recommend both Peninsula Motorsports and AvantGard Spa for your northern peninsula needs!

This entry was posted in Mom Motorcycling, Ninja 250, Wrenching. Bookmark the permalink.

One Response to A maintenance day for everyone