This past weekend was the annual bike show.  We decided to go on Friday evening because we figured it would be less crowded due to (a) Friday (b) raining (c) Halloween.  We were right — there were VERY few people there.  Probably pretty boring for the staff and vendors but it made it really easy to be there with four adults and two small children.

Our first stop was the Ducati booth where most of the family members found something to enjoy. 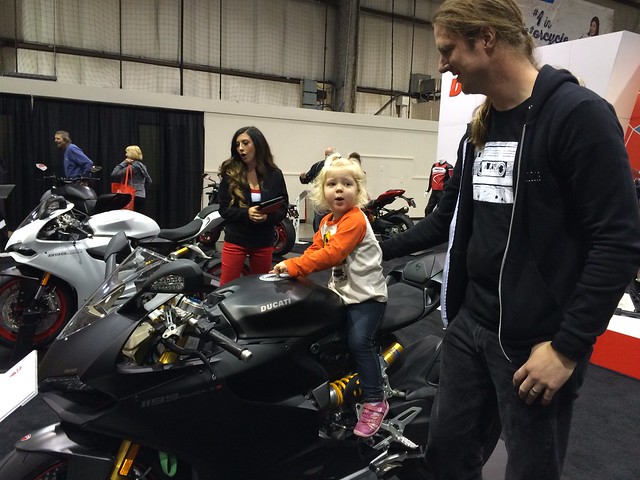 Dirtbikes make a little more sense for Kira at this stage.  I don’t want to encourage the $30,000 Penigale. 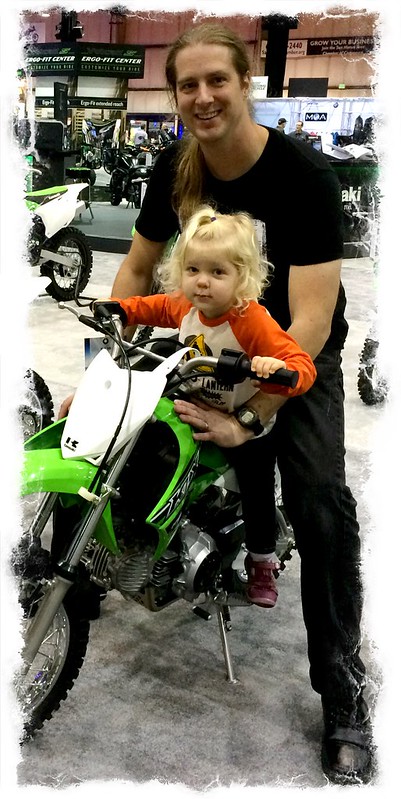 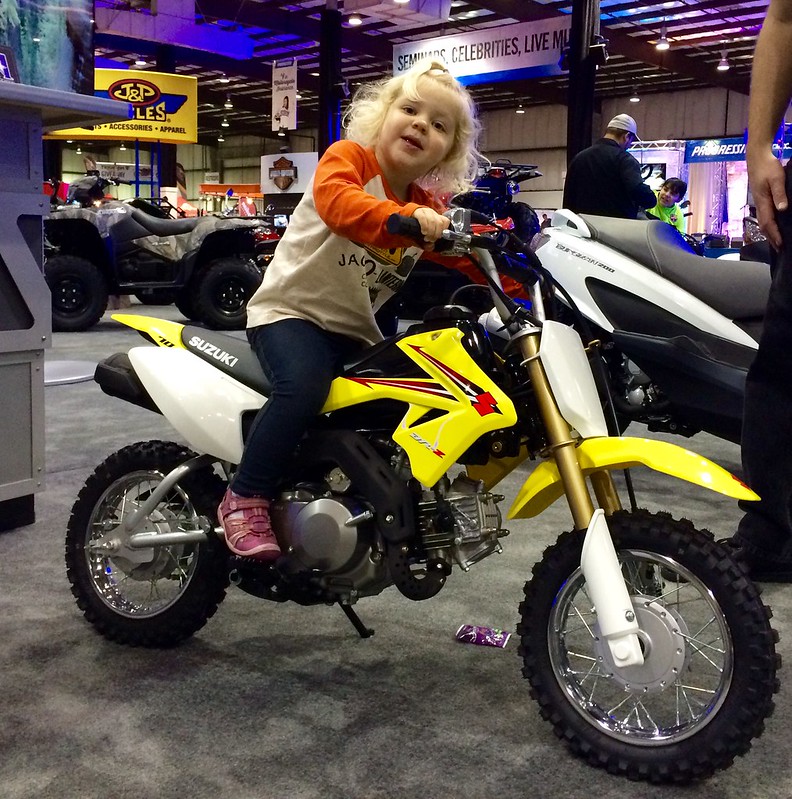 Did I mention it was empty? 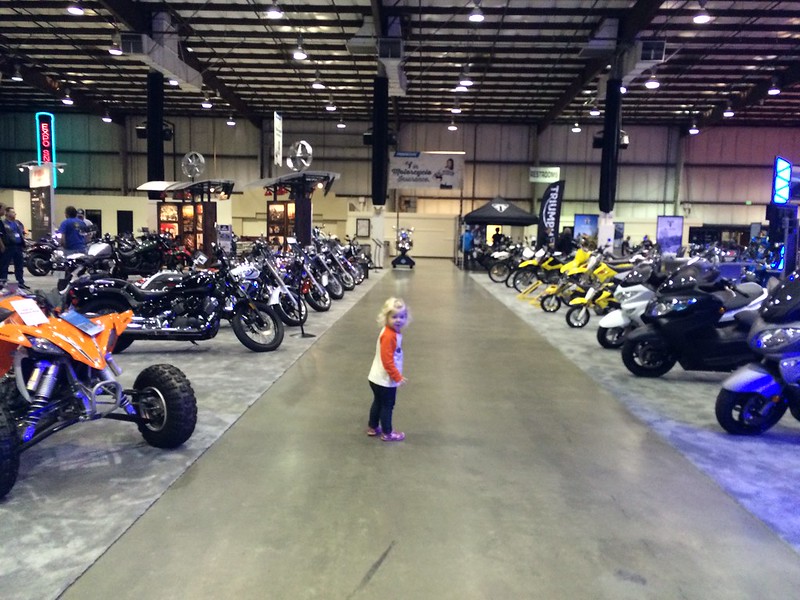 Alex and I were there, too: 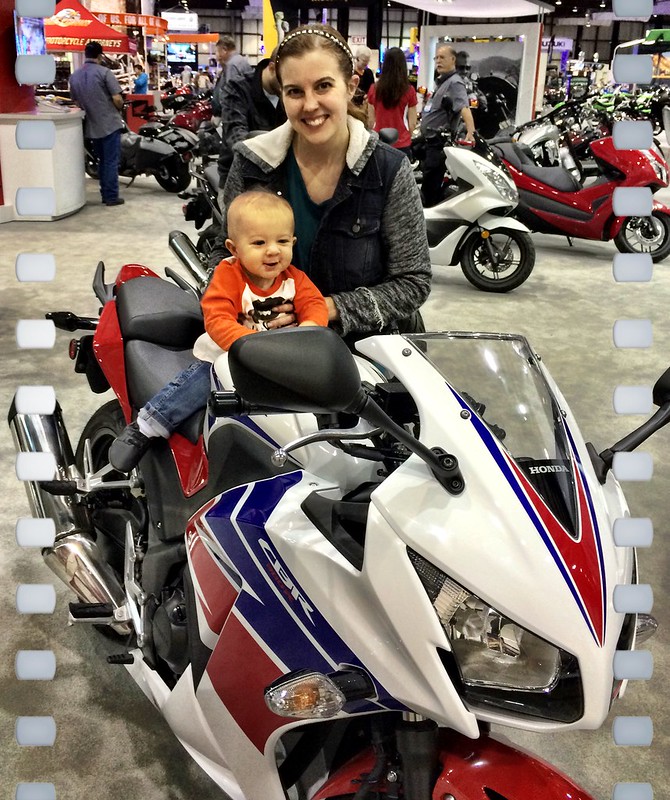 Styling is in another gross phase (IMHO) and it seems like all the tanks have this weird bulbous tumor shape going on.  There weren’t a lot of shorty-friendly offerings from Kawasaki or Yamaha this year (I continue my extreme displeasure with the direction the Ninja 300 is going in — I know they’re trying to make the “beginner bikes” look like their bigger sports bikes, but it’s not like tall people who prefer the look of supersports have a dearth of options).

I did like the CBR300R from Honda and the GW250F from Suzuki.  The latter was a little top-heavy but the ergos were pretty decent.  The GW250F is definitely the bike I would look most closely at if I were in the market for a new bike today (I’m not, thankfully). 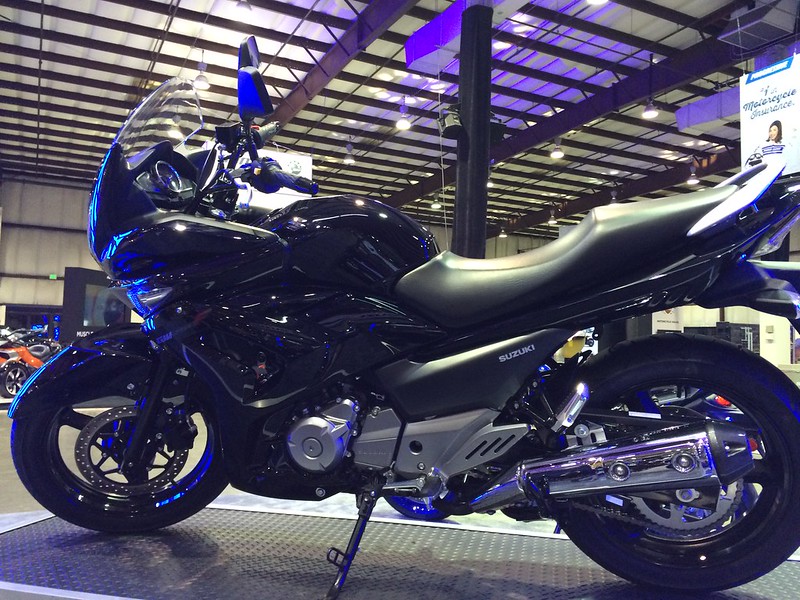 I wanted to sit on the new R3 from Yamaha but they only had one and it was up on a platform.  I seriously don’t understand why manufacturers bring bikes to the show that people can’t even get a close look at.

Honestly, the most interesting “bike” there was an ergonomically customizable model of Spyder.  They came up with a tool for dealers that allows immediate measurement and placement for both handlebars and foot pegs.  The guy at the booth set me up with the hobbit sized placement and it was very comfortable.  I liked how you could swamp out handlebars in about 10 minutes and have a completely different setup for a taller vs shorter rider.  Setting aside the whole “blah blah is a Spyder a real motorcycle blah blah” topic, it was encouraging that this is something manufacturers are considering. 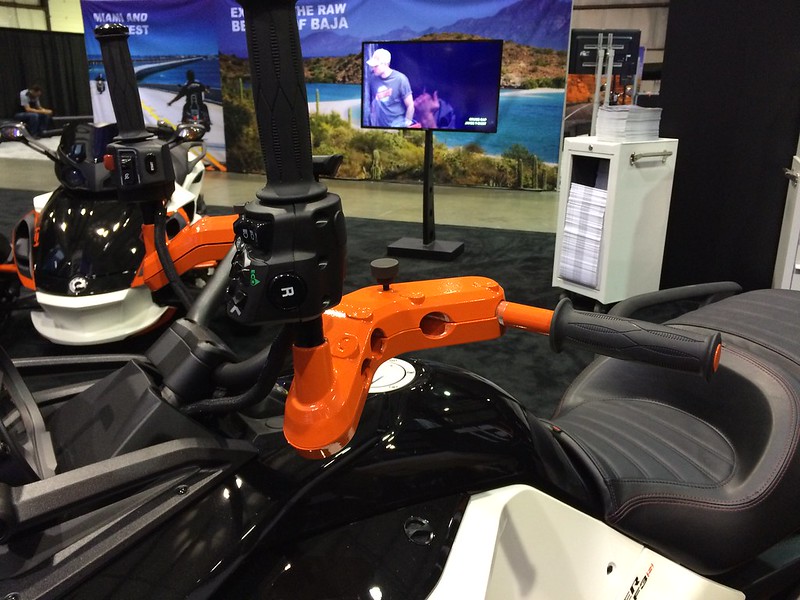 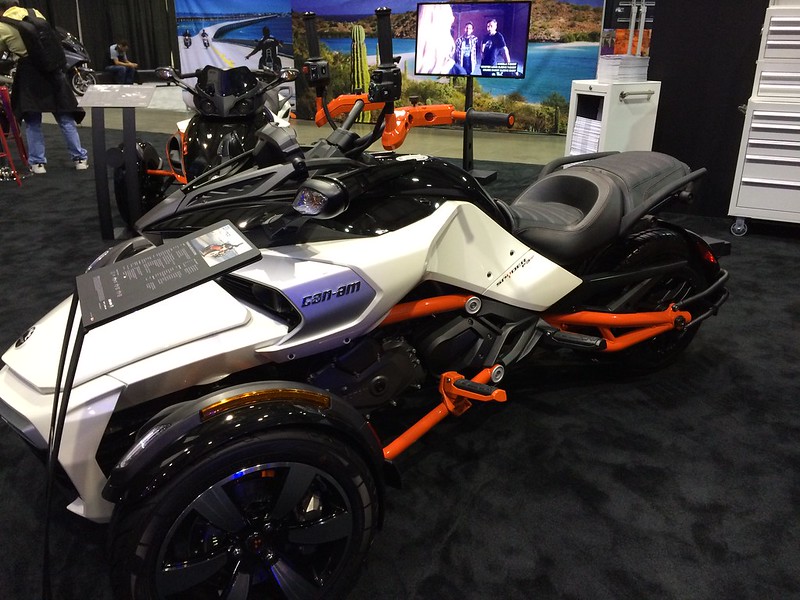 Oh, the other thing I got unnaturally excited about was that the HJC CL-Y Redline line of youth helmets now apparently do not suck!  They seemed to have the same venting system as the adult line AND the visor system is now a flush-mounted ratchet system as God intended.  For those of us with hobbit heads that need youth sized helmets, this is really cool.

So that was the bike show for us this year.  Nothing really stood out, though I am encouraged that so many 300cc bikes are coming to the States lately.  I don’t necessarily like the styling because I am old and cranky, but at least there are options that weren’t available 10 years ago.  Progress!

This entry was posted in Alex, Kira, The Daily Grind. Bookmark the permalink.